the chameleons live at the Camden palace…. 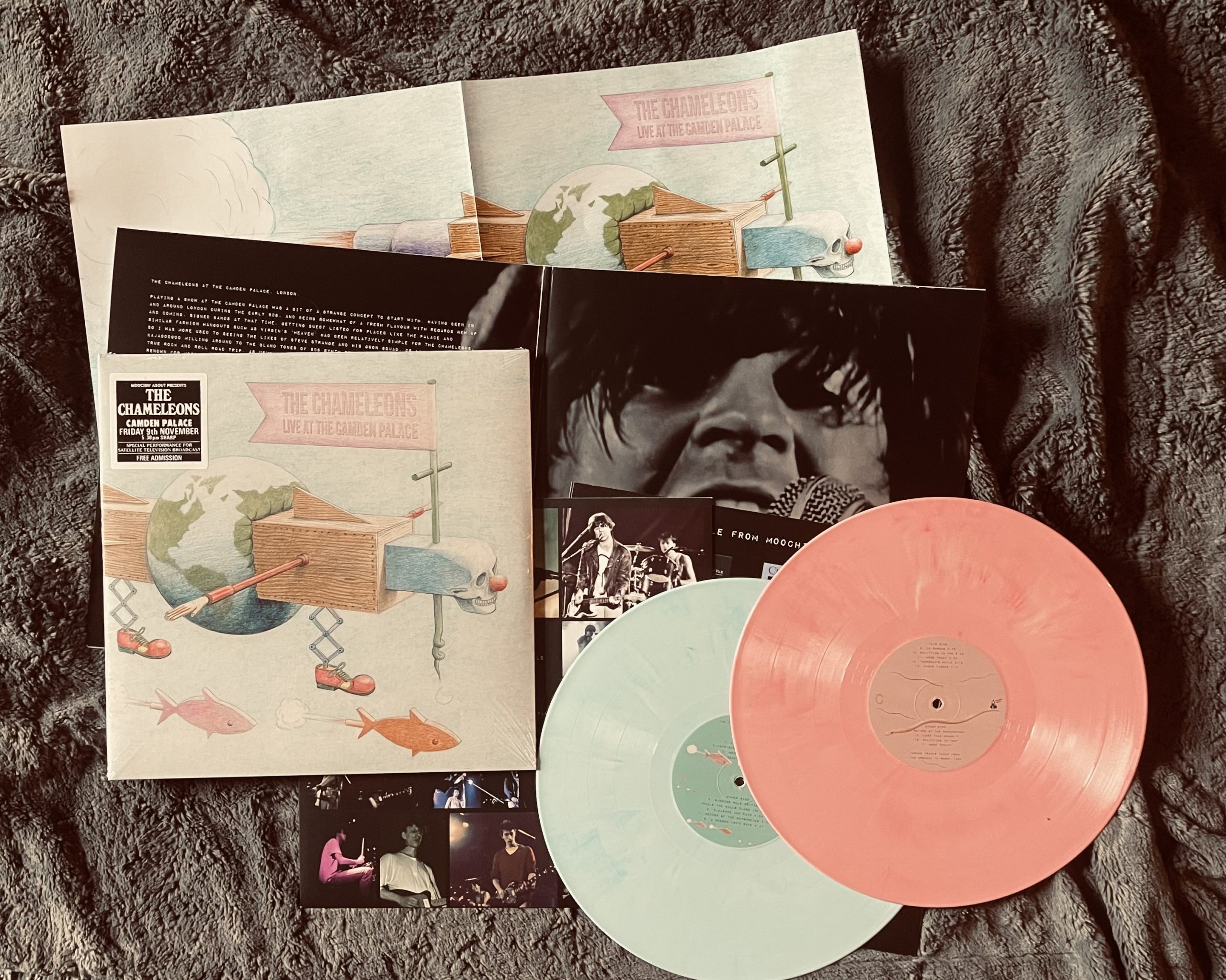 13 Feb the chameleons live at the Camden palace….

Posted at 12:45h in New Release by admin 0 Comments
0 Likes
The Chameleons ~ Live at The Camden Palace…
MOOCHIN33
Ltd edition 2LP x Chameleon coloured vinyl,
CD & Poster
Finally our new release is available in all good record shops..!
Celebrating The Chameleons 40th anniversary, this iconic concert is released on vinyl for the very first time…
The Camden Palace was a special performance recorded for a satellite TV broadcast and features Middleton’s finest on top of their game, playing tracks taken from ‘Script of the Bridge’ & ‘What Does Anything Mean? Basically’…
this album also includes 4 bonus tracks from the Arsenal concert, which was recorded for an independent Catalonian local tv channel, in 1985…
The cover art has been exclusively designed by Chams guitarist, Reg Smithies, who designed all official Chameleons studio releases.
Mark Burgess – Bass/Vocals
Reg Smithies – Guitar
Dave Fielding – Guitar
John Lever – Drums 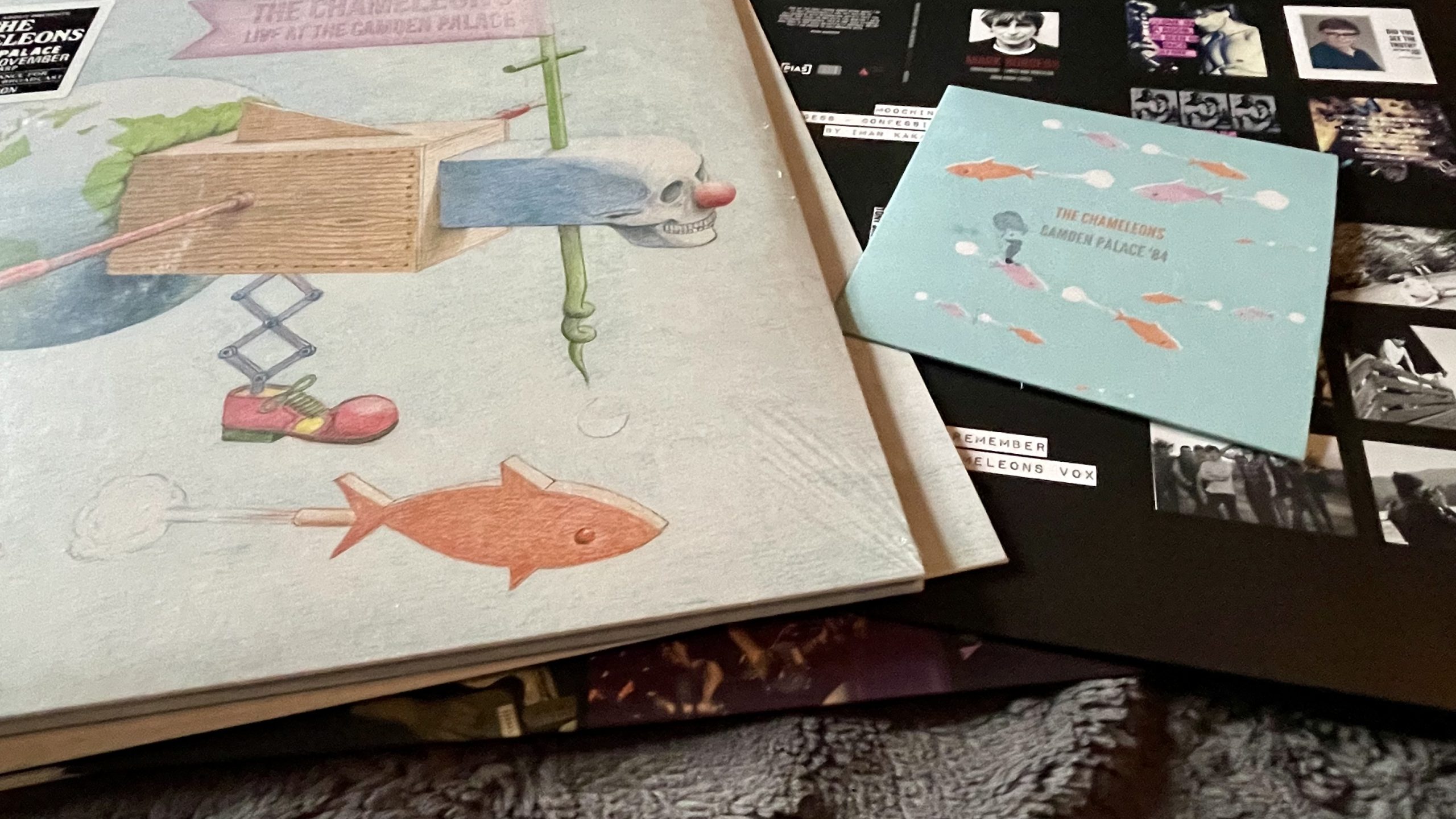 The Chameleons are an acknowledged influence on future generations of indie and alternative rock bands including Stone Roses, The Charlatans, Smashing Pumpkins, The Flaming Lips, The Killers, The Horrors, The National and Interpol…Oasis main songwriter Noel Gallagher claims The Chameleons were an early influence on his song writing , and quoted in a recent interview …‘I’d forgotten how much Strange Times meant to me. It came out in ‘86. I was 19!! I’ve been listening to it every day since and I have to say it’s blown my mind..again! It must have influenced my early years as a song writer because I can hear ME in it everywhere!!’
This concert has only ever been previously released on DVD…
THE CAMDEN PALACE LONDON 11/9/84
1 Don’t Fall 4:14
2 Intrigue In Tangiers 3:22
3 Monkeyland 4:29
4 Second Skin 5:40
5 Singing Rule Britannia (While the Walls Close In) 3:40
6 Pleasure And Pain 4:04
7 Return Of The Roughnecks 3:28
8 A Person Isn’t Safe 4:47
9 In Shreds 3:59
10 Splitting In Two 6:28 (ATV cover version)
11 Here Today 3:55
12 Thursday’s Child 3:16
13 Paper Tiger 4:01
Bonus tracks available on 2 x Lp only, from the Arsenal gig, which was recorded for an independent Catalonian local tv channel, back in 1985, show called “temps estranys” (strange times..!).
14. Return of The Roughnecks
15. Less Than Human
16 Splitting in Two
17.Here Today
MOOCHIN33
Strictly Ltd edition 2LP x Chameleon coloured vinyl
CD, 2 previosuy useen photo’s & Poster
Original artwork for this release by Reg Smithies
Mark Burgess – Bass/Vocals
Reg Smithies – Guitar
Dave Fielding – Guitar
John Lever – Drums
Tony Skinkis – additional guitars on Splitting in Two
original notes..
Formed in Middleton near Manchester, England in 1981 The Chameleons never quite achieved the success of many of their contemporaries but are arguably just as important. Today the band still has a huge international fan base and it’s not surprising. The distinct often melancholy sound is at once abrasive and melodic; their live performances both mesmerising and highly emotional; their stage presence larger than life. In many ways the Chameleons epitomise the northern post punk movement of the eighties, capturing the mood of those bleak times when many industries were in terminal decline and anywhere north of Watford was considered a wasteland. The Chameleons channelled dissolution in to music like nobody else, but somehow managed to create a sound that was uplifting, almost hymn-like.