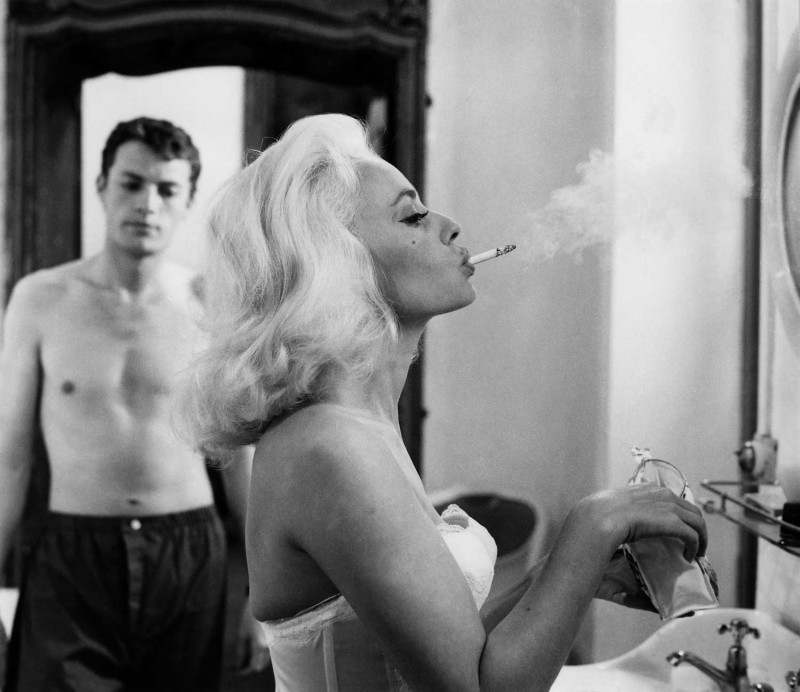 Posted at 15:44h in Uncategorized by admin 0 Comments
0 Likes

So sad to hear cover star to 2 Moochin’ About releases (The New wave I & The New Wave II) and Femme Fatale of French New Wave, Jeanne Moreau has died at the age of 89…
she featured in 5 films covered in the Jazz On Film series… Les Liaisons dangereuses, Bay of Angels, La Notte, Lift to The Scaffold & Eve…

Moreau was honored with a 1965 Time magazine cover story, rare for a foreign actress, and was compared to such screen greats as Garbo and Monroe. Since her rise to prominence in the mid-’50s, she epitomized the tenets of the French new wave, boasting a womanly sexuality and a fierce independent spirit. Orson Welles, who worked with Moreau on several films, once called her “the greatest actress in the world.”

Major directors scrambled to work with her and often became her lovers offscreen. She starred in films by Louis Malle, Francois Truffaut, Jacques Demy, Michelangelo Antonioni, Welles, Luis Bunuel and Joseph Losey. In the mid ’70s she turned briefly to directing and even paid homage to an earlier screen legend with a documentary about Lillian Gish.

While still in theater school Moreau was recruited by the Comedie Francaise, where she appeared in Ivan Turgenev’s “A Month in the Country.” During her stint with the troupe from 1948-52, she racked up 22 roles, although she later referred to her classical training as “a prison term.”

She then moved on to the Theatre National Populaire, where she was cast in “Le Prince de Hambourg” and “Le Cid” opposite Gerard Philipe.

During these years she appeared in films beginning with “Dernier amour” in 1949, “Meurtres,” the musical “Pigalle-Saint-Germain-des-Pres,” “L’Homme de ma vie” and “Il est minuit docteur Schweitzer.”

Her stage role in 1953’s “L’Heure eblouissante”(“The Dazzling Hour”), in which she took on the dual roles of a man’s wife and mistress (after her co-star took ill), made her a French theater star, and she continued to dazzle Paris with roles in “Pygmalion,” Cocteau’s “La Machine infernale” and “La bonne soupe.” In her biggest legit break, she was Maggie the Cat in a production of “Cat on a Hot Tin Roof” directed by Peter Brook in 1956.

The film roles continued mostly in low-budget vehicles such as “Les Hommes en blanc,” “Le Salaire du peche” and “Echec au porteur.” But in 1957, after seeing her in “Cat,” director Louis Malle cast her in his first feature, “Ascenseur pour l’echafaud” (Elevator to the Gallows), which was critically hailed as a film noir masterpiece upon its re-release in the U.S. in 2005. She quickly followed the film with “Trois jours a vivre” and “Le dos au mur.”

It was her second film for Malle, the racy “Les amants,” in 1958 that made her an international star and icon. She followed it with “Les Liaisons dangereuses,” for Roger Vadim; “Les dialogue des Carmelites”; 1960’s Marguerite Duras-scripted “Moderato cantabile,” which won her a best actress award at Cannes; Antonioni’s “La notte,” in which she played an alienated woman of the upper class; and, most memorably, Truffaut’s “Jules and Jim” (1962), which she and the director financed.

By then, every major director in the world was seeking her services. She starred for Losey in “Eva” — Moreau’s performance as a psychologically disturbed woman has been called her riskiest — and Demy in “La baie des anges.”

She starred with Anthony Perkins in Welles’ Kafka adaptation “The Trial” in 1962, but her first Hollywood role came in the routine “The Victors,” followed by John Frankenheimer’s excellent WWII thriller “The Train” and Anthony Asquith’s comedy “The Yellow Rolls Royce.”

She did a comedic romp for Malle, “Viva Maria!,” with Brigitte Bardot. Next was Bunuel’s brilliant “Diary of a Chambermaid” (1964) and Welles’ “Chimes at Midnight” in 1965. She also appeared in Marcel Ophuls’ comedy “Banana Peel.” She appeared in two Tony Richardson vehicles, “Mademoiselle” (adapted by Duras from a Jean Genet story) and “The Sailor From Gibraltar” (adapted from a Duras novel) that were box office disasters, as was “Great Catherine” with Peter O’Toole, although many applauded Moreau’s performance in “Mademoiselle.”

She excelled, however, in Truffaut’s suspenseful “The Bride Wore Black” and Welles’ “The Immortal Story.”

But as Time observed, “Moreau forcefully demonstrates the verve, style and flamboyant femaleness that makes her the envy of European sex symbols much greener in years…Too bad that a first-rate actress so often has to squeeze her victories out of second-rate scripts.”

By 1970 good roles were growing scarcer. There were Philippe de Broca’s “Chere Louise” in 1972, Duras’ “Nathalie Granger,” Losey’s “Mr. Klein” and “The Trout,” Elia Kazan’s “The Last Tycoon,” Bertrand Blier’s “Les Valseuses” and Rainer Werner Fassbinder’s swan song “Querelle.” During the decade she also directed two films, “Lumiere,” a story of female friendship in which she also starred, and “L’Adolescente,” which starred Simone Signoret. She also helmed a 1984 documentary on Lillian Gish for the American Film Institute.

By the ’80s and ’90s, she had slowed down considerably, gracing such films as “La Femme Nikita,” “Until the End of the World,” “The Summer House” and “The Proprietor” with her presence.

In 1985 she made her U.S. stage debut in a revival of Tennessee Williams’ “Night of the Iguana,” but the production folded out of town on its way to Broadway. In 2001 she adapted Margaret Edson’s “Wit” for the French stage and directed the production.

Moreau won a Cesar for best actress in 1992 for her performance as an irrepressible con artist in “The Old Lady Who Wades in the Sea.”

She continued her long association with Marguerite Duras by providing the narration for both the English and French versions of Jean-Jacques Annaud’s 1992 adaptation of Duras novel “The Lover”; in 2001 she played the novelist and filmmaker in “Cet amour-la.”

As she entered her 80s Moreau remained busy onscreen. She starred in “Disengagement” and “One Day You’ll Understand,” films by the Israeli filmmaker Amos Gitai. She also worked in French television, starring in 2013’s “Le tourbillon de Jeanne.”

The actress also continued to make appearances in English-language films on occasion, showing up in 1993’s “Map of the Human Heart”; “I Love You, I Love You Not” (1996), in which she played Claire Danes’ grandmother, a Holocaust survivor; and 1998 fairy-tale reworking “Ever After,” starring Drew Barrymore.

Moreau’s lineage was only half French, her mother Anglo-Irish from Lancashire. She was born in Paris, although she spent part of her childhood in the tiny village of Mazirat in France’s Allier region. While attending the Lycee Edgar Quinet, she stole away to see her first play, Jean Anouilh’s “Antigone” and determined to be an actress. She auditioned for the Conservatoire National d’Art Dramatique and made her stage debut in an Avignon festival production of “La Terasse de midi.”

Moreau was head of the jury at the 33rd Berlin Film Festival in 1983, won an Honorary Golden Berlin Bear at the fest in 2000 and picked up an honorary Palme d’Or at Cannes in 2003 and an honorary Cesar in 2008.

The Academy of Motion Picture Arts & Sciences saluted Moreau in a tribute held in October 1998, and in 2002 she was interviewed by James Lipton on “Inside the Actors Studio.”

She was married twice, first to actor, director and screenwriter Jean-Louis Richard (1949-51) and then to American film director William Friedkin (1977-79). She is survived by a son, actor Jerome Richard.