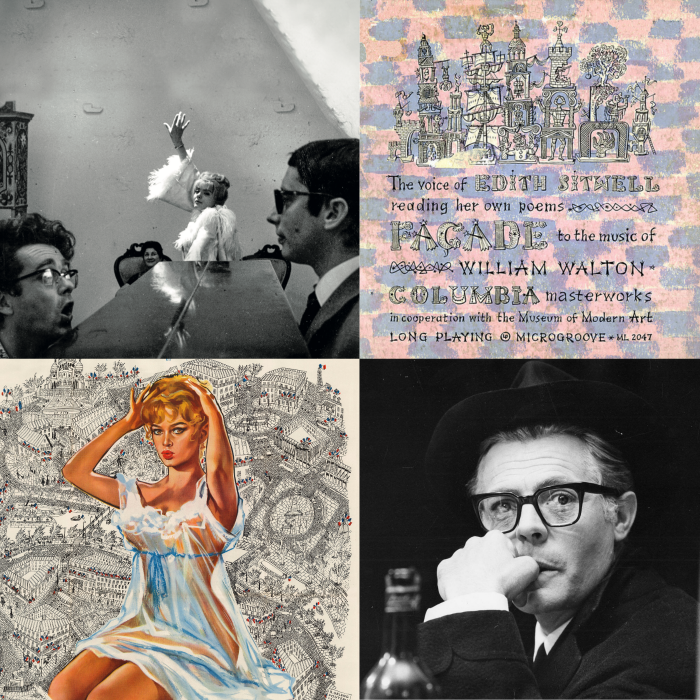 Record Store Day is the one day of the year when over 200 independent record shops all across the UK come together to celebrate their unique culture. Special vinyl releases are made exclusively for the day and many shops and cities host artist performances and events to mark the occasion. Thousands more shops celebrate the day around the globe in what’s become one of the biggest annual events on the music calendar….

But due to COVID-19, RSD has quite rightly been postponed and will now take place on Saturday 29th August 2020…

For the 4th year, moochin’ about will be a participating label, this year with 4 exclusive releases – 3 based on the Jazz On Film series it started back in 2011 and 1 Classical/spoken word release, which are…

Celebrating 100 years of 2 prolific composers and 3 of their iconic film soundtracks, collected here for the first time…It’s the 60th anniversary of the film “Voulez-vous danser avec moi ?” a film that’s feature stars such as Serge Gainsbourg, and Brigitte Bardot who became one of France’s biggest stars off the back of Une Parisienne & “Voulez-vous danser avec moi ?”…The films also features stars such as Henri Vidal, who sadly died of lung cancer soon after the finishing filming of “Voulez-vous danser avec moi ?” …Hodeir was born in Paris and trained as a classical violinist and composer and Henri Crolla was an Italian jazz guitarist and composer who moved to France when he was just 2 years old… they met up in the early 50’s and scored over 10 films together…
. 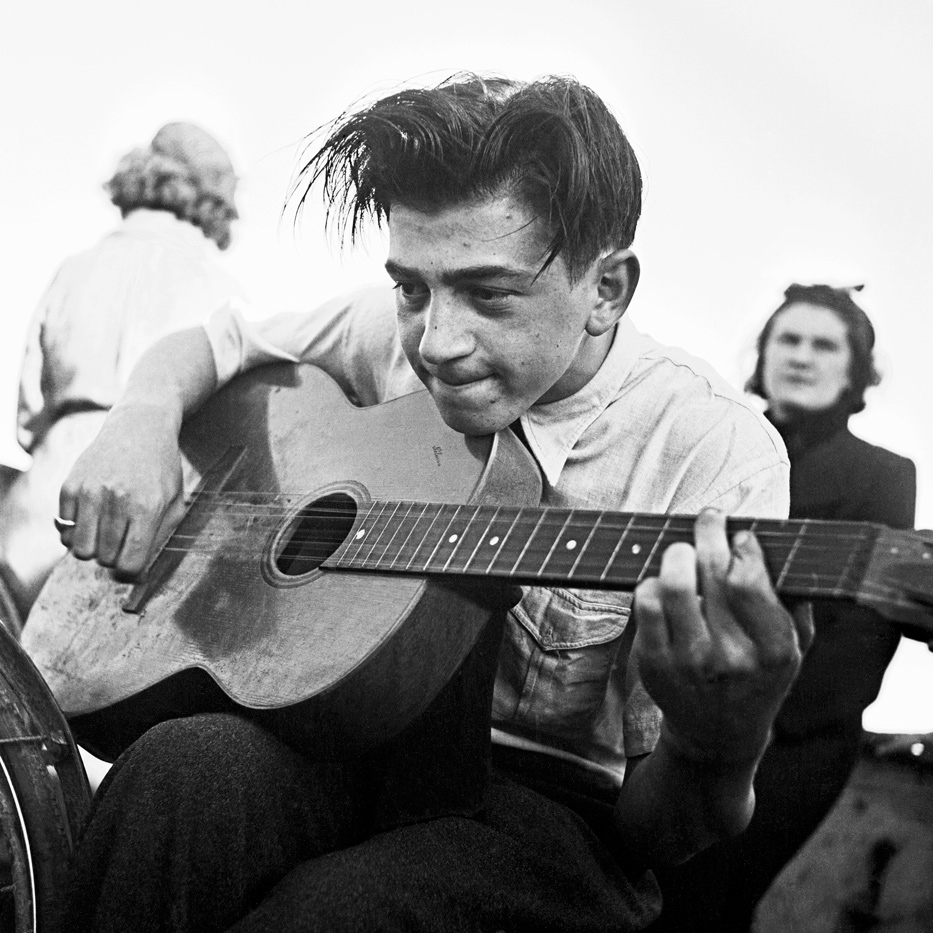 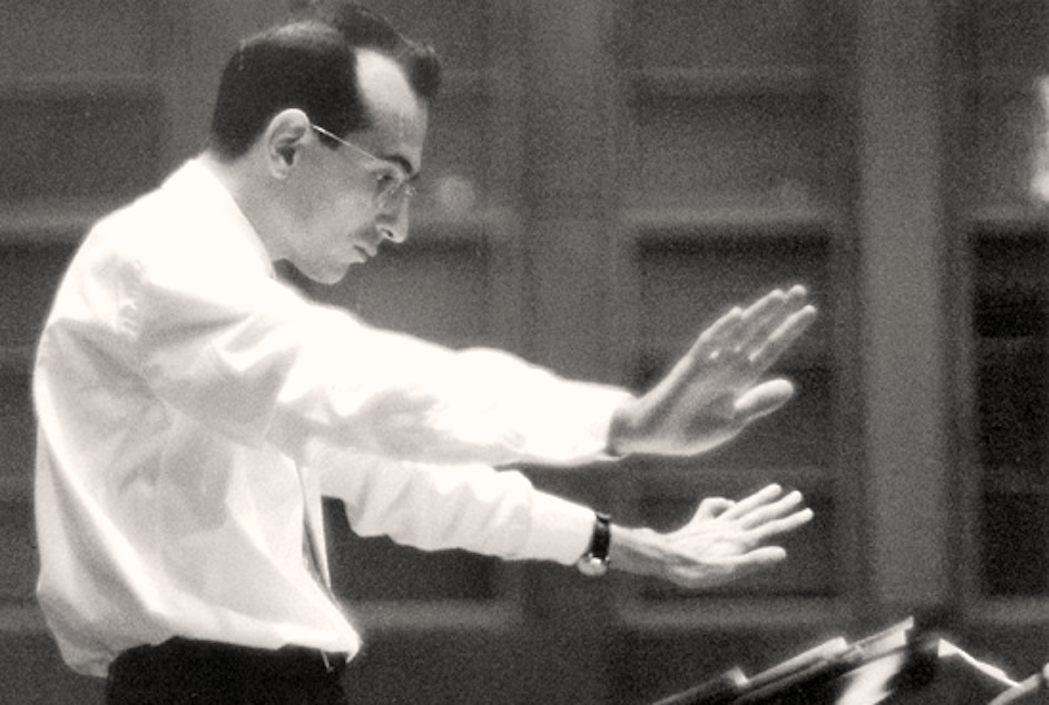 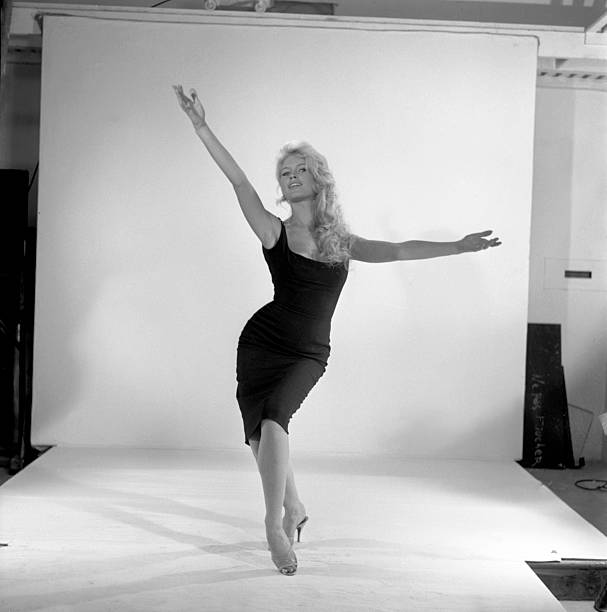 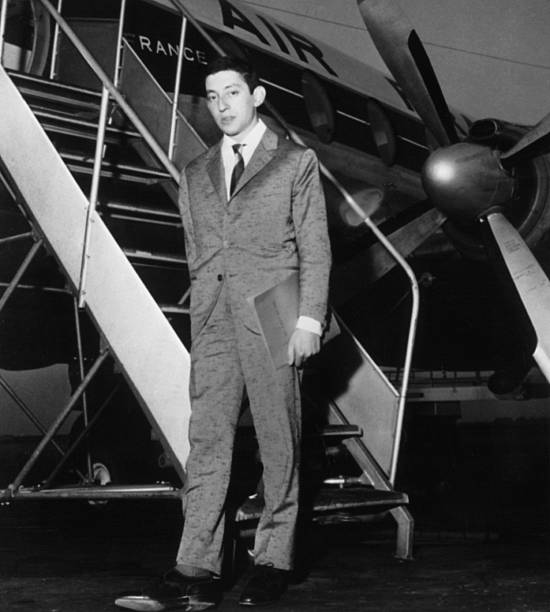 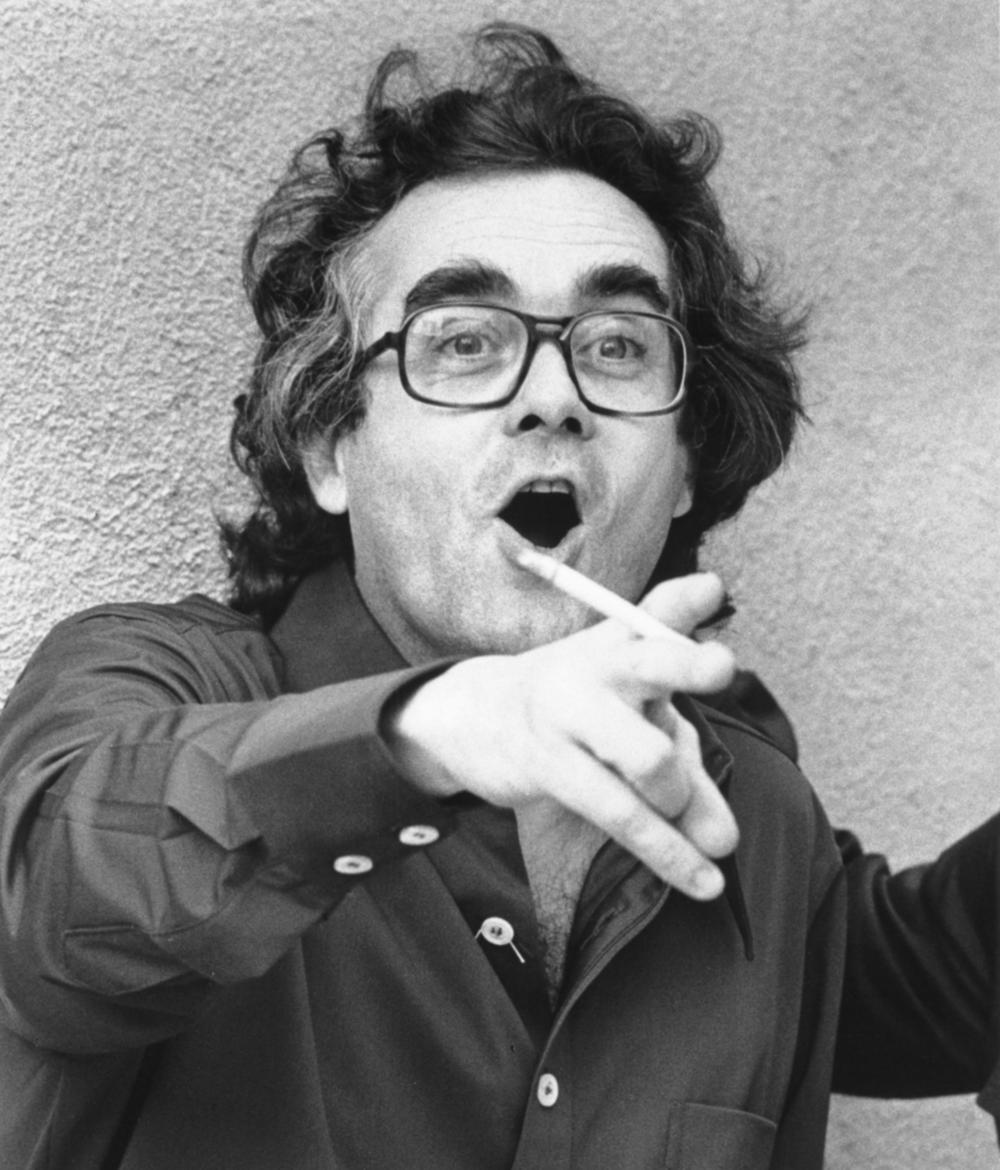 Celebrating the life of the legend that is Michel Legrand and music for the New Era, this stunning stand-alone collection, compiled by label owner Jason Lee Lazell features the jazz cuts from some of the most iconic films of the French New Wave era….

Legrand’s songwriting skills flowered in the early 1950s through intimate acquaintance with the modern chanson movement in Paris, at first as a gifted piano accompanist. After the second world war, the US was nostalgic for French culture, and when Columbia Records commissioned an English-language album of chanson classics, the young Legrand was hired to steer it – and found himself with an 8m-selling hit.

By his mid-20s, Legrand was able to call the shots as a composer and arranger on both sides of the Atlantic. In 1958, he even had more than sufficient clout to hire Miles Davis, John Coltrane and Bill Evans – three of the hippest and most acclaimed young jazz musicians of the decade – to play sidemen’s roles on his Legrand Jazz session.

Michel was born in the Paris suburb of Bécon-les-Bruyères into a family with strong musical connections. His father, Raymond Legrand, was a composer, conductor and former pupil of Gabriel Fauré, and in his later years would go on to collaborate with Edith Piaf and Maurice Chevalier. His maternal uncle on his mother Marcelle’s side was the dance-band saxophonist and bandleader Jacques Hélian.

But Raymond left home when Michel was three, and his mother Marcelle (nee Ter-Mikaëlian), struggled to provide for the boy and his older sister, Christiane. He found a consoling friend in the flat’s battered piano and it quickly emerged that he had a gift. Christiane also played the instrument, and she was similarly destined for a successful career in music, as a jazz singer.

Michel became obsessed with the music and life of Franz Schubert, and – with Nadia Boulanger among his teachers – won a raft of prizes on a variety of instruments at the Paris Conservatoire, which he began attending as a 10-year-old in 1942. But a 1947 Paris concert by the bebop trumpeter Dizzy Gillespie and his big band thrilled him with the sound of jazz.

By the time he left the conservatoire in 1949 he was a budding jazz pianist with a profound knowledge of musical theory and a working knowledge of many instruments. His resourcefulness quickly found him work with chanson stars including Juliette Gréco and Zizi Jeanmaire, and in 1954 the international popularity of chanson brought his international breakthrough…

Legrand began a solo career, with the easy-listening but sophisticated jazz albums Holiday in Rome (1955), Michel Legrand Plays Cole Porter (1957) and Legrand in Rio (1958). He also worked with the French Caribbean singer Henri Salvador, who, under the alias of Henri Cording, made some of the first French forays into rock’n’roll, with Legrand furnishing the music and the surrealist novelist, poet and jazz critic Boris Vian the lyrics. In 1958, he returned to New York to make his celebrated Legrand Jazz album – with Ben Webster joining Coltrane, Evans and Davis in the lineup.

Legrand later admitted to being anxious about Davis’s involvement. The trumpeter rarely played sessions other than his own and made a diva’s point of arriving 15 minutes late, checking out the music from the studio doorway and promptly leaving if he did not like the sound of it. But, according to Legrand, the usually taciturn Davis not only participated, but even asked the young bandleader if he had liked his contribution.

By this point, Legrand was developing a parallel career as a film composer. He scored Henri Verneuil’s 1955 crime passionel movie Les Amants du Tage (The Lovers of Lisbon), and became a significant collaborator with the new wave directors Jean-Luc Godard, Agnès Varda and François Reichenbach. He also composed for Jacques Demy, most notably on the innovative Les Parapluies de Cherbourg (The Umbrellas of Cherbourg) – a reappraisal of the film musical, combining a realist perspective with a narrative in which songs replaced dialogue…

This gatefold LP features tracks from the new wave era which includes.… 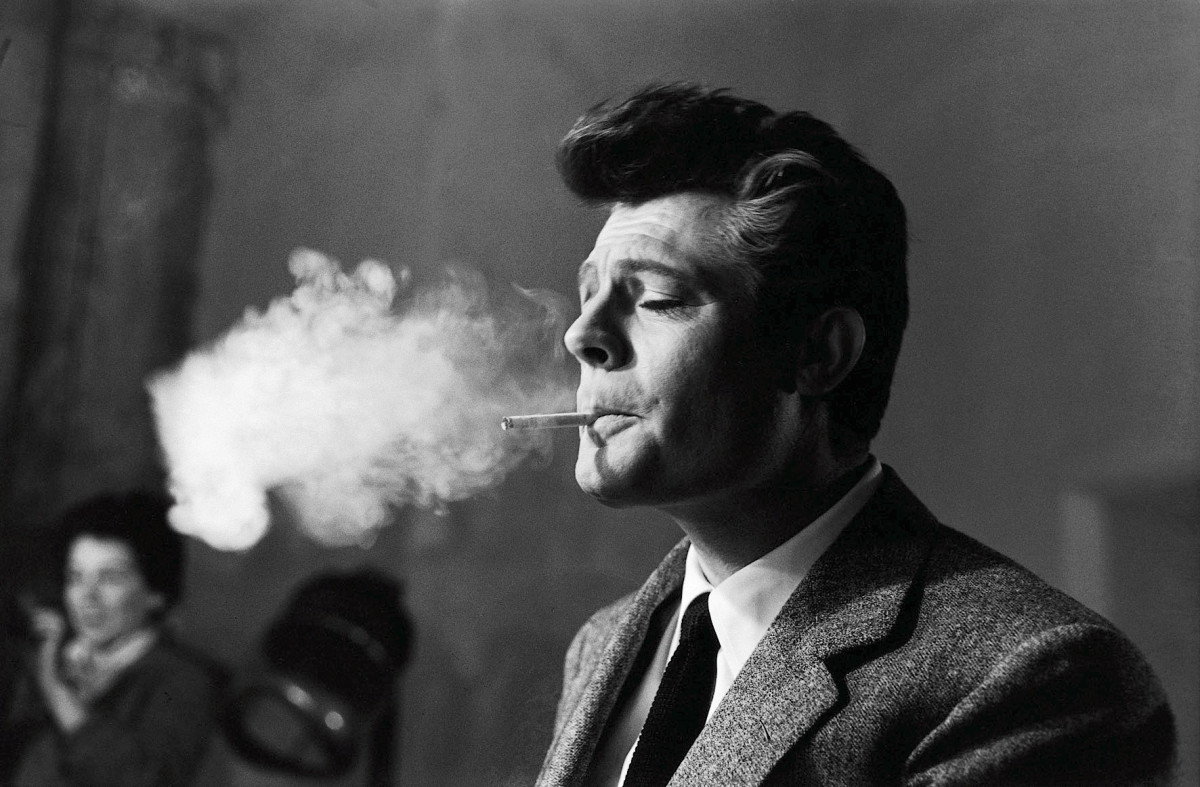 This stunning  LP collection features a tailored made, stand-alone jazz compilation by Moochin’ About label owner Jason Lee lazell , with a download code for all the complete scores featured…

Marcello Mastroianni was born in Fontana Liri, Italy in 1924, but soon his family moved to Turin and then Rome. During WW2 he was sent to a German prison camp, but he managed to escape and hide in Venice. He debuted in films as an extra in Marionette(1939), then started working for the Italian department of “Eagle Lion Films” in Rome and joined a drama club, where he was discovered by directorLuchino Visconti. In 1957 Visconti gave him the starring part in his Fyodor Dostoevsky adaptation Le Notti Bianche(1957) and in 1958 he was fine as a little thief in Mario Monicelli‘s comedyPersons Unknown (1958). But his real breakthrough came in 1960, when Federico Fellinicast him as an attractive, weary-eyed journalist of the Rome jet-set in La Dolce Vita (1960); that film was the genesis of his “Latin lover” persona, which Mastroianni himself often denied by accepting parts of passive and sensitive men. He would again work with Fellini in several major films, like the exquisite Federico Fellini’s 8½ (1963) (as a movie director who finds himself at a point of crisis) and the touchingGinger and Fred (1986) (as an old entertainer who appears in a TV show). He also appeared as a tired novelist with marital problems in Michelangelo Antonioni‘s The Night (1961), as an impotent young man in Mauro Bolognini‘s Bell’ Antonio (1960) , as an exiled prince inJohn Boorman‘s Leo the Last (1970), as a traitor in Paolo and Vittorio Taviani‘s Allonsanfan(1974) and as a sensitive homosexual in love with a housewife in Ettore Scola‘s A Special Day (1977). He was nominated for the Academy Award for Best Actor three times, for Divorce Italian Style (1961), A Special Day (1977), and Dark Eyes (1987). During the last decade of his life he worked with directors, like Theodoros Angelopoulos, Bertrand Blier and Raoul Ruiz, who gave him three excellent parts in Three Lives and Only One Death (1996). He died of pancreatic cancer in 1996… 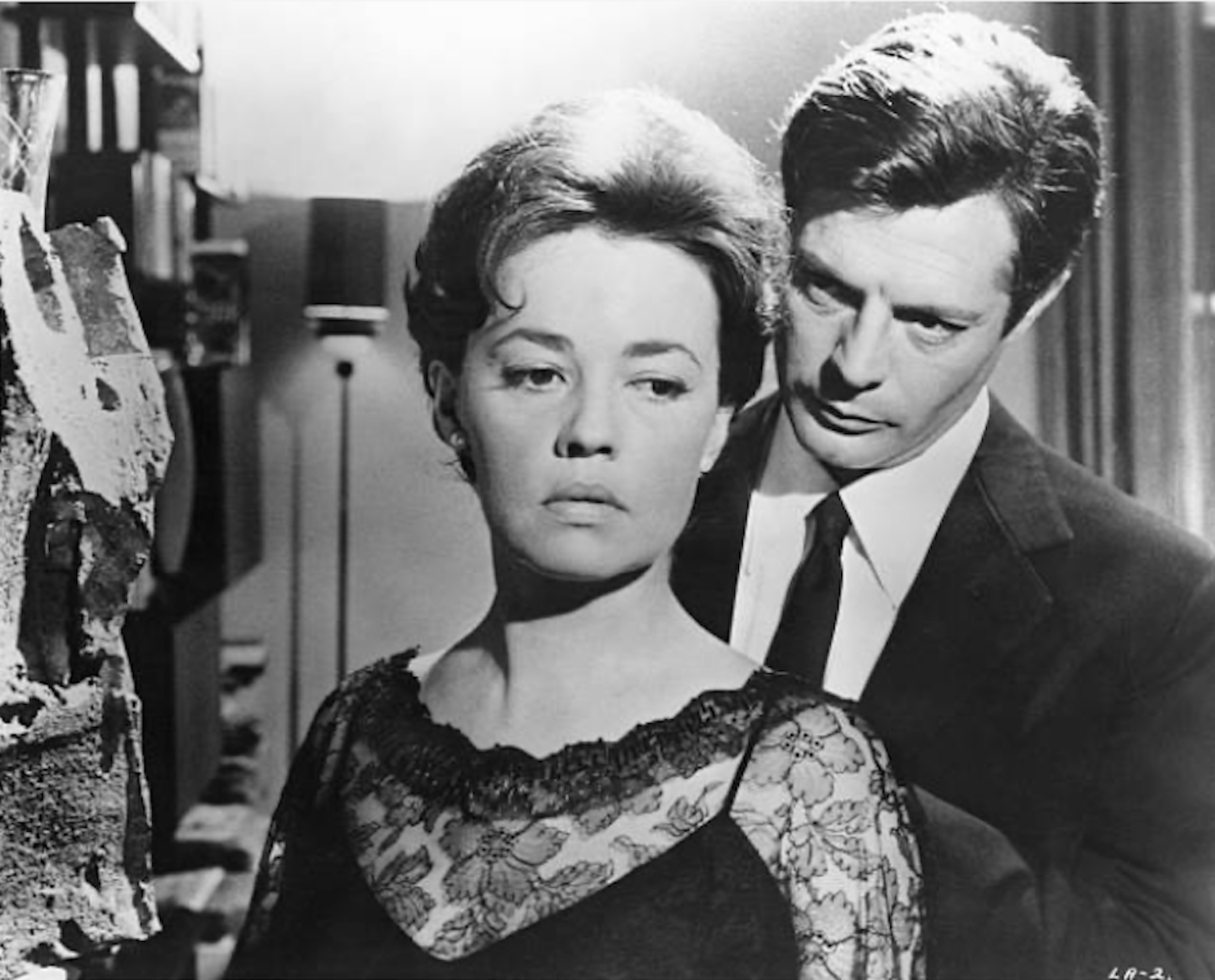 Scores featured on this gatefold LP, are jazzier cuts from some of his most iconic films and include…

I Compagni (The Organizer) – Carlo Rustichelli 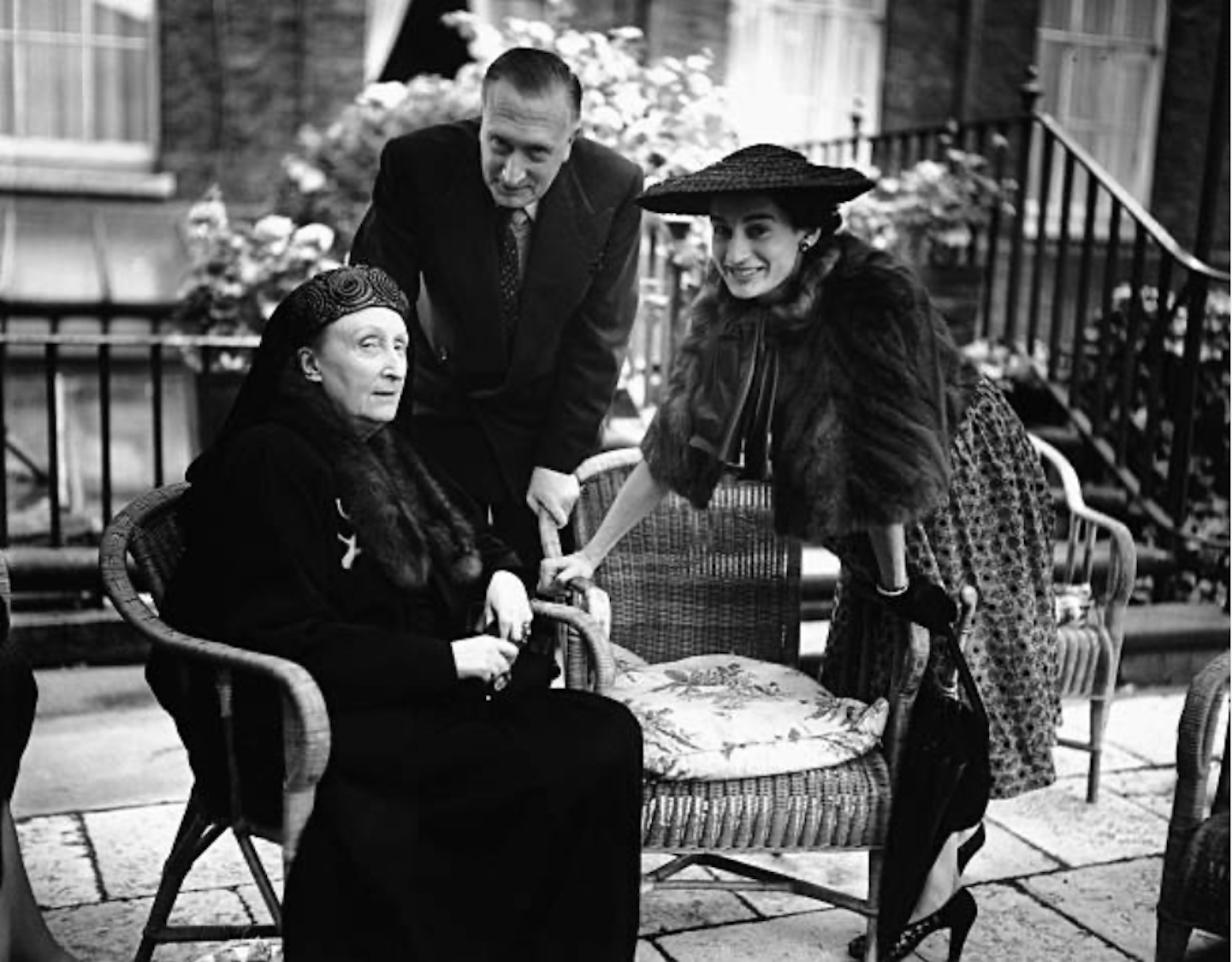 This is the 2nd release in the Jim Flora cover art series, with a 10″ release of Edith Sitwell & William Walton ‘Facade’ a selection of 10″ gatefold with 26 page lyric book 70TH Anniversary of this unique recording taken from Scarborough born Edith Sitwell series of poems and on the 100th anniversary of the original transcripts…

Sitwell was like the Wahol of her day, publishing a mountain of essays and poems covering every aspect of the arts…The Scarborough-born poet-eccentric extraordinaire who had once publicly declared that her immense wisdom had been born of a long, unrequited love affair with the Russian painter, Pavel Ychelitchew – unrequited on the account of his homosexuality… 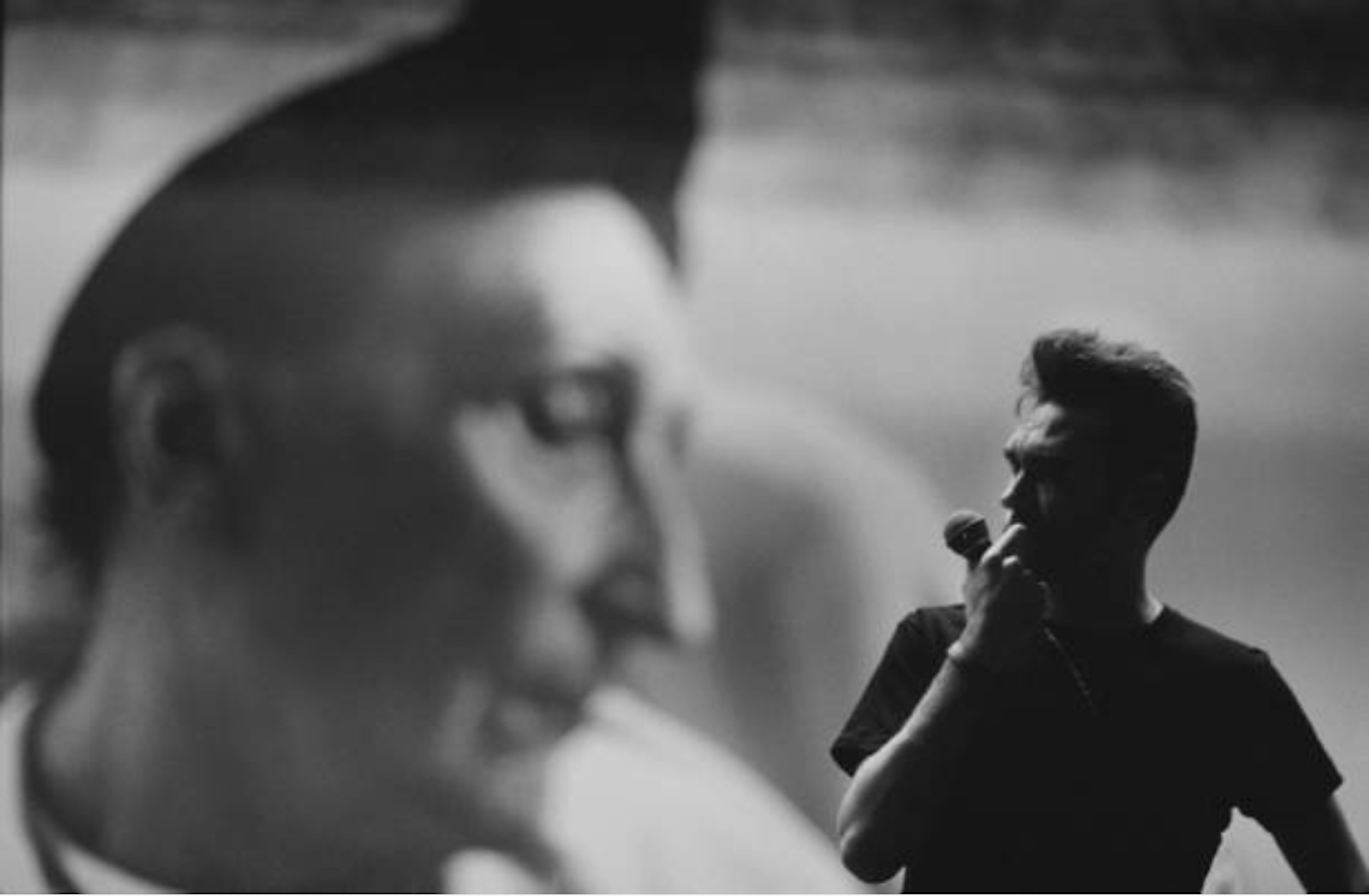 Sitwell fan Morrissey, heavily featured Edith as his tour mascot on his Kill Uncle tour and used her image as his stage backdrop and on his T-shirts… and like Morrissey, Sitwell also had a knack of putting her foot in it, pontificating at one of her world famous Bayswater Tea parties, I have been bought up on Rhythm as other children were bought up on Glaxo! And another, when a coachload of noisy children were arriving, “it almost makes one wish for another King Herod!”