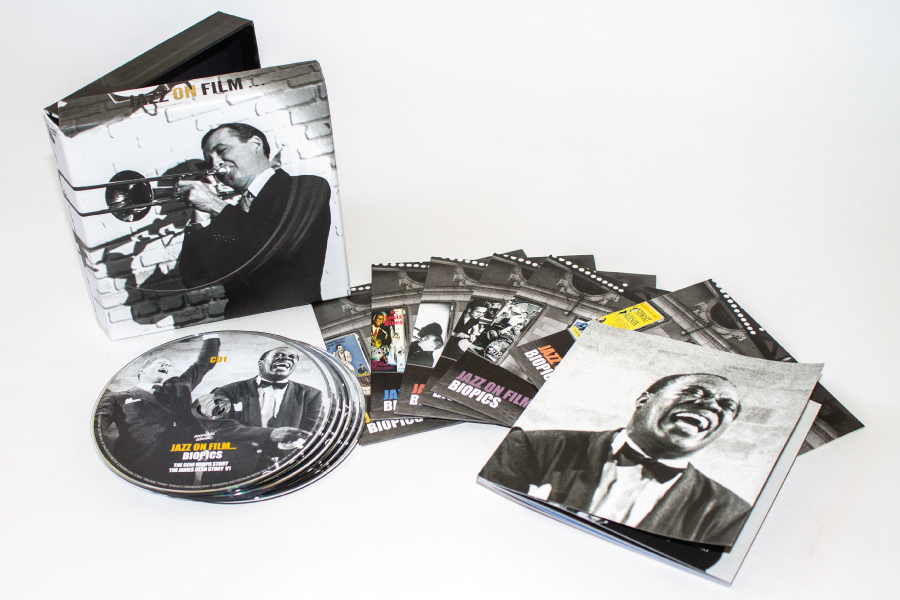 Film biopics go through phases – sometimes favoured by the Oscar jurors, sometimes not… The 1950s was a fertile period for them and in particular for jazz musicians, whose music influenced many… Jazz was seen as rebellious enough to be part of the score to these tributes to the greatest symbols of the era!

The styles go from the beginning of jazz to west coast cool, but what every subject of the films has is desire! A desire to succeed, a desire to be the best, a desire to live in the here and now and (most of all) a desire to this on their own terms. It makes for great stories and great Hollywood movies, but most of all, it leads to wonderful film scores!

A fantastic and unique release by Moochin’ About compiles for the first time a collection of stunning jazz scores from classic biographical films! The films themselves trace the life stories of some of the most influential Jazz & Blues musicians in history, as well as one of the most iconic film actors: James Dean. Two versions of The James Dean Story score appear in this collection: The original Leith Stevens soundtrack, plus the critically acclaimed Capitol Records version by Johnny Mandel, featuring top flight soloists Chet Baker, Bud Shank and an array of star spangled sidemen!

Other films included on this unique collection are Young Man With Horn, which is loosely based on the tragic life of Bix Beiderbecke, whose sound in the film is expertly dubbed by the great Harry James. Also featured isThe Five Pennies, which tells the dramatic story of jazz trumpeter Red Nichols, played in the film by a remarkably straight faced Danny Kaye. The film is especially memorable for Kaye’s duet with Louis Armstrong… A great addition to this set is also the very rare St Louis Blues, which is broadly based on the Father of The Blues, WC Handy, with a young and inspiring Nat King Cole playing the lead role…

This collection is scattered with Jazz legends appearing in both the films and the soundtracks and is a must for jazz and film buffs alike. The boxset will be released as a limited edition in 2 different covers… Version 1 will feature James Stewart on the cover, from The Glenn Miller Story and version 2 will feature Louis Armstrong, taken from the film The Five Pennies, with Danny Kaye on the reverse side.

BUY HERE FROM MOOCHIN’ ABOUT BANDCAMP