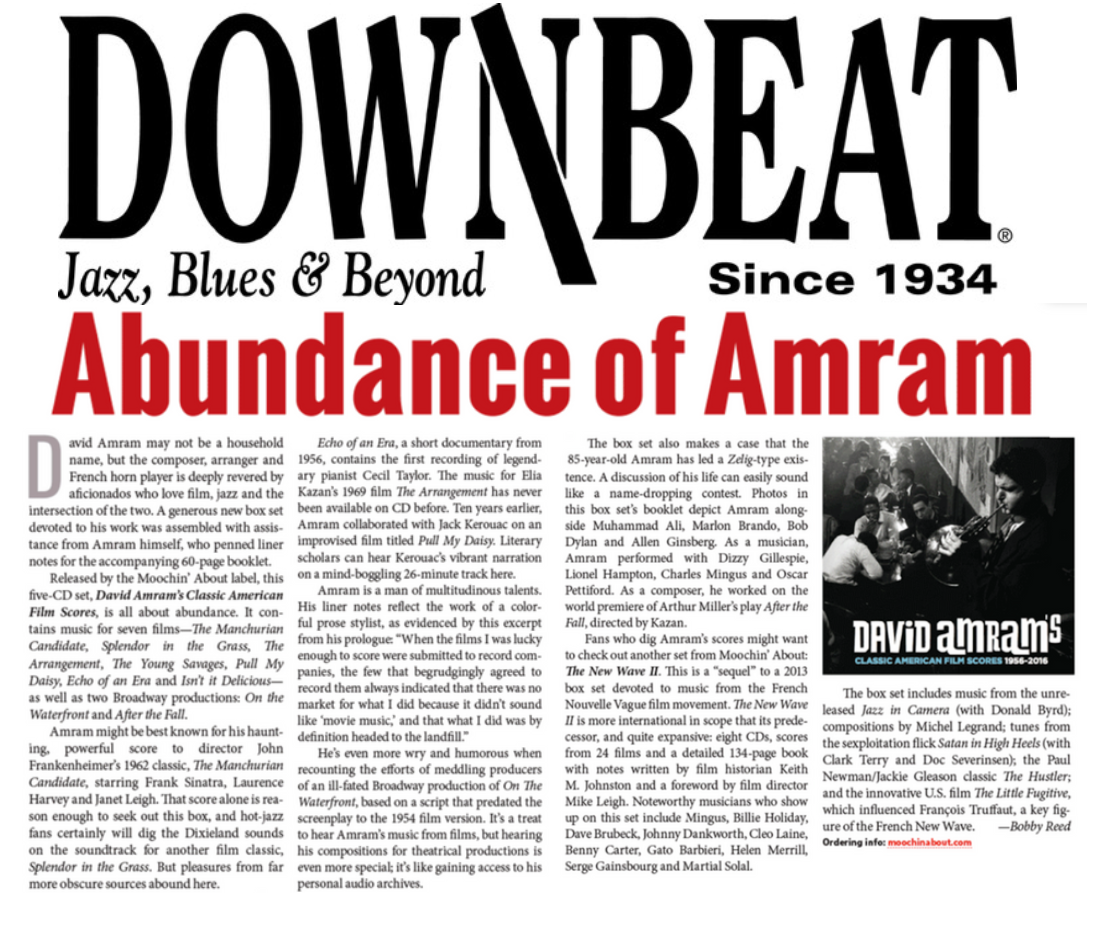 Posted at 12:28h in Uncategorized by admin 0 Comments
0 Likes

“ABUNDANCE OF AMRAM”
By Bobby Reed
David Amram may not be a household name , but the composer, arranger and French horn player is deeply revered by aficionados who love film, jazz and the intersection of the two. A generous new box set devoted to his work was assembled with assistance from Amram himself, who penned liner notes for the accompanying 60-page booklet.
Released by the Moochin’ About label, this five-CD set, David Amram’s Classic American Film Scores (1956-2016), is all about abundance. It contains music for seven films—The Manchurian Candidate, Splendor in the Grass, The Arrangement, The Young Savages, Pull My Daisy, Echo of an Era and Isn’t it Delicious—as well as two Broadway productions: On the Waterfront and After the Fall.
Amram might be best known for his haunting, powerful score to director John Frankenheimer’s 1962 classic, The Manchurian Candidate, starring Frank Sinatra, Laurence Harvey and Janet Leigh. That score alone is reason enough to seek out this box, and hot-jazz fans certainly will dig the Dixieland sounds on the soundtrack for another film classic, Splendor in the Grass. But pleasures from far more obscure sources abound here.
Echo of an Era, a short documentary from 1956, contains the first recording of legendary pianist Cecil Taylor. The music for Elia Kazan’s 1969 film The Arrangement has never been available on CD before. Ten years earlier, Amram collaborated with Jack Kerouac on an improvised film titled Pull My Daisy. Literary scholars can hear Kerouac’s vibrant narration on a mind-boggling 26-minute track here.
Amram is a man of multitudinous talents. His liner notes reflect the work of a colorful prose stylist, as evidenced by this excerpt from his prologue: “When the films I was lucky enough to score were submitted to record companies, the few that begrudgingly agreed to record them always indicated that there was no market for what I did because it didn’t sound like ‘movie music,’ and that what I did was by definition headed to the landfill.”
He’s even more wry and humorous when recounting the efforts of meddling producers of an ill-fated Broadway production of On The Waterfront, based on a script that predated the screenplay to the 1954 film version. It’s a treat to hear Amram’s music from films, but hearing his compositions for theatrical productions is even more special; it’s like gaining access to his personal audio archives.
The box set also makes a case that the 85-year-old Amram has led a Zelig-type existence. A discussion of his life can easily sound like a name-dropping contest. Photos in this box set’s booklet depict Amram alongside Muhammad Ali, Marlon Brando, Bob Dylan and Leonard Bernstein. As a musician, Amram performed with Dizzy Gillespie, Lionel Hampton, Charles Mingus and Oscar Pettiford. As a composer, he worked on the world premiere of Arthur Miller’s play After the Fall, directed by Kazan.