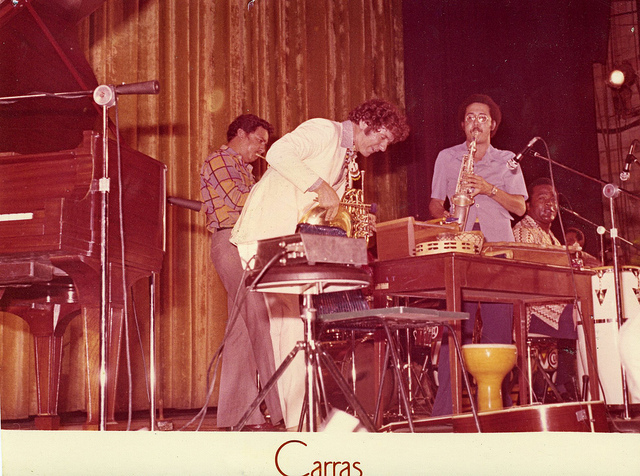 Posted at 09:46h in Moochin' News by admin 0 Comments
0 Likes
In 1977, President Jimmy Carter granted permission for Exprinter Tours to send a ship of Jazz Masters — Dizzy Gillespie, Earl `Fatha’ Hines, Stan Getz, David Amram with their bands — to Havana, Cuba for a historic 36 hour cultural exchange/Jazz jam with Cuba’s best young jazz musicians.Gillespie, Hines, Getz, and Amram and their bands, were the first group of U.S. citizens allowed by Washington to visit Cuba since 1961. David Amram is the last remaining band leader from that historic exchange
Now today, more than 40 years later, David Amram is again making history.   As relations between governments may be fragile, it is Jazz that is still keeping cultural exchanges between Americans and Cubans alive.   87 year old David Amram has been invited by 89 year old Gilberto Valdez Zekueira (the host of the 1977 concerts), to return to Cuba for the first time since 1977 to perform at the Havana Jazz Festival – this January 15-21st.
Amram will be performing two concerts at the Jazz Festival and one in the city, backed by the big band of Cuban Jazz legend, 89 year old Bobby Carcasses.  Also accompanying Amram will be the last remaining member of Los Papines, the famed Cuba percussion group that performed and recorded with Amram at his `77 concert.  Amram composed his Cuban Jazz masterpiece “En Memoria de Chano Pozo” on the boat to Cuba. It was recorded live at the concert, and released subsequently on his Havana/New York album (see photo).  On the ship back to New York, Dizzy Gillespie urged Amram to adapt the piece for a full symphony orchestra.  Consequently, the piece has been performed regularly all around the world by orchestras for the past forty years.
David Amram, an acclaimed multi-genre artist, plays 35 instruments and helped pioneer the French Horn in Jazz in the early 1950s, while playing with Dizzy Gillespie, Charles Mingus, Lionel Hampton, and Oscar Pettiford. When not composing and playing Jazz, he also became one of America’s most performed classical composers, and a symphonic conductor and solist, and the first composer in residence of the New York Philharmonic.  An author of three books, Amram is also a pioneer of Global Folk Music, where he has collaborated with Pete Seeger, Odetta, Bob Dylan, Willie Nelson, along with Mongo Santamaria, Candido, Tito Puente and Machito.  And with Jack Kerouac, he created the art form Jazz & Poetry.   He has composed for opera, was the first composer in residence of Joe Papp’s Shakespeare in the Park, has written the scores for two dozen Broadway plays, and his Jazz influenced film scores, such as the classics The Manchurian Candidate and Splendor in Grass, resulted in this year’s five CD box set release, DAVID AMRAM’s Classic American Film Scores (1956-2016).
David & Dizzy..!