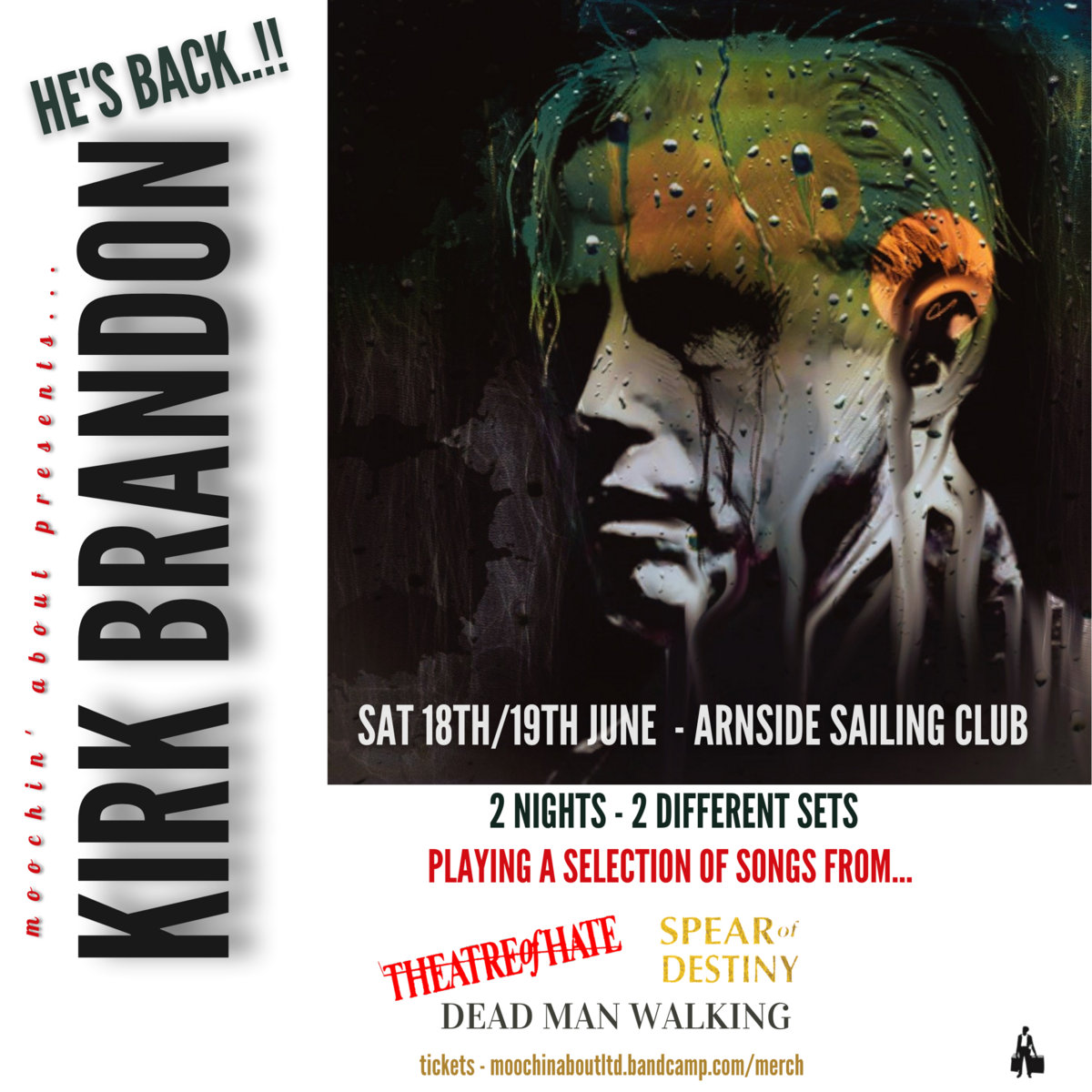 Posted at 09:13h in Uncategorized by admin 0 Comments
0 Likes

He’s back..!!
Moochin’ About proudly presents ~ An evening with Kirk Brandon at Arnside Sailing Club …

After the sold out shows in November, we’re delighted to announce Kirk is coming back for 2 evenings at the sailing club, playing 2 different sets covering his career, featuring songs from Theatre of Hate, Spear Of Destiny & Dead Man Walking on the fathers day weekend of the 18th & 19th June…

This weekend will also feature the book launch of Iman’s latest book release, in the critically acclaimed collaboration series ~ Confessions, Lyrics & Nostalgia – where Kirk & Iman will be signing copies …

Kirk Brandon rose to fame as the frontman of post-punk rockers Theatre Of Hate, who enjoyed their biggest hit with Do You Believe In The Westworld in 1982.
He went on to form Spear Of Destiny and reached No.14 in 1987 with Never Take Me Alive and released further acclaimed singles including Come Back and So In Love With You plus the much acclaimed Liberator, not forgetting over 15 unbelievable studio albums and countless single releases, his career now spans well over 30 years. He has enjoyed worldwide success with all three of the above bands and is also a leader in every punk rock poll by being the singer and songwriter in The Pack.

Move forward Kirk now plays different dates with Spear Of Destiny, Theatre Of Hate and his pre TOH punk band, The Pack, and he is as busy as ever with all three bands plus his solo show.

Over the last 11 years, Kirk has released five solo acoustic studio albums (the “Dutch Masters” series) that have pulled tracks from all era’s of his career, these albums have also featured many of the people Kirk has worked with and collaborated with over the years including Derek Forbes (Simple Minds), Slim Jim Phantom (Stray Cats), Mike Peters (The Alarm) & Clint Boon (Inspiral Carpets).

This is a rare chance to see one of the UK’s greatest singer songwriters up close & personal, in the idyllic village of Arnside…

Biog…
Brandon’s music career started in 1978, in Clapham, south London, with the formation of punk group The Pack, in which he was the singer and songwriter.

The Pack consisted of Brandon, Scottish-born drummer Rab Fae Beith and two Canadian brothers, Simon and Jon Werner on guitars. The last live gig by The Pack took place at the 101 club in Clapham.

Brandon then formed the post punk new wave band Theatre of Hate in 1980 recruiting Stan Stammers on bass guitar, Nigel Preston on drums, Billy Duffy on guitar and John ‘Boy’ Lennard on saxophone. Theatre of Hate had their largest hit from the Westworld album with the single “Do You Believe in the Westworld?”, which achieved #40 in the UK Singles Chart in January 1982, while the album rose to #17 in the UK Albums Chart in March 1982.[1]

Theatre of Hate disbanded in 1983. Brandon and Stammers were then joined by Lascelles James on saxophone and Chris Bell on drums to form Spear of Destiny. The new band adopted a more melodic and less aggressive sound, distancing themselves from post-punk and moving a little more towards mainstream pop.

While continuing to explore the political ideas that he wrote about in Theatre of Hate, Brandon’s lyrics for Spear of Destiny dealt more frequently with the classic pop themes of love and romance. Many line-up changes followed with the band swelling to a 6 piece and then contracting back to a 4 piece. The band’s reputation as a live act never translated itself into record sales, and Spear of Destiny only had one Top 20 hit.

In 2003, Brandon did a solo tour as support to The Alarm on their ‘Poppyfields’ tour. His set included some new material played on an acoustic guitar with electric pick up, as well as some material from his time with Theatre of Hate and Spear of Destiny.

In later years he performed in the punk supergroup, Dead Men Walking, before reforming and touring with Spear Of Destiny in 2007 and 2008. Brandon continues to tour with both Spear of Destiny and Theatre of Hate, as well as a revamped Dead Men Walking, and acoustic shows including with cellist Sam Sansbury….