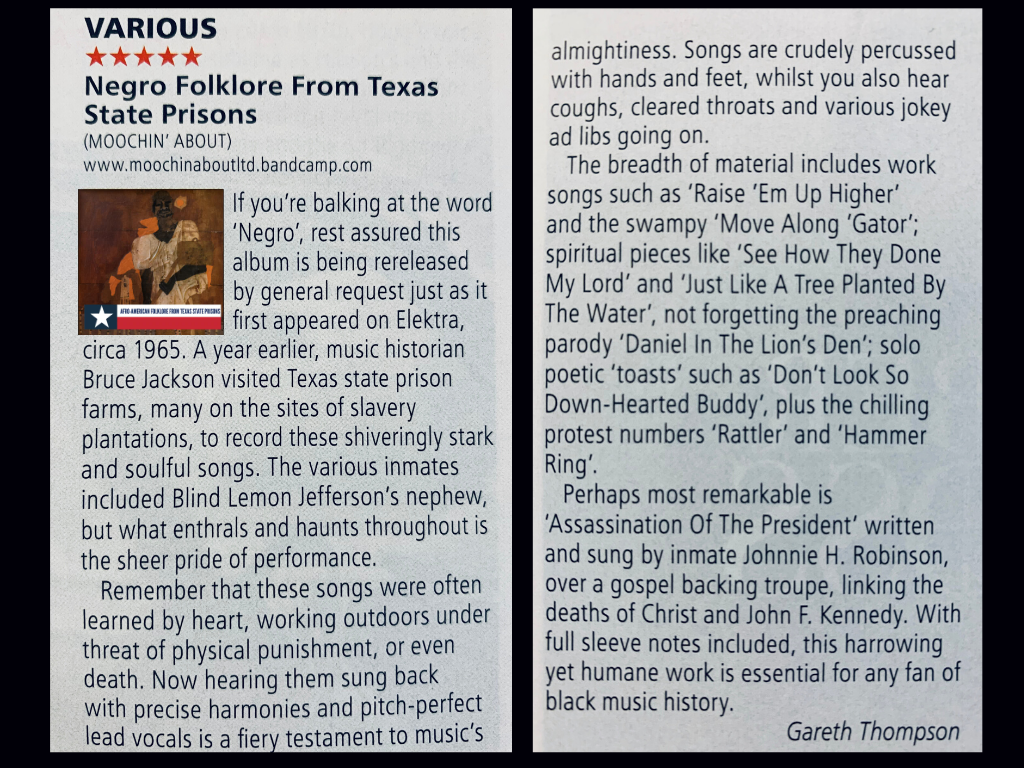 Recorded and edited by Bruce Jackson

The recordings on this album were made in Texas prison farms in July 1964. I’d gone there in the hope of recording black convict worksongs, a tradition that derived from slavery, and, before that, was imported from Africa. Many of the prisons in Texas, Mississippi and Louisiana where such songs had been sung, had been built on the sites of slaverytime plantations. It was as if the owners changed, but not much else.

I found far more than worksongs. Prison is a place where people live: when they go there, they bring with them pieces of free world culture, just as someone migrating from one country to another brings cultural knowledge and practice to the new home. In addition to the worksongs, I heard spirituals, blues, toasts (recited poems), and much more. In this LP, , I tried to give a sense of that range of material. (In other recordings, I would focus on work songs, toasts, and personal narrative.)

Free-world songs and verses made their way into the work song repertoire: lines that appeared in gospel churches or in the songs or railroad trackliners outside reappeared in the songs of convicts cutting down trees, cutting logs, chopping and picking cotton and cutting sugarcane inside.

Funds for that 1964 trip, and others that would would follow, were provided by the Harvard Society of Fellows. Rae Korson and Joe Hickerson of the Library of Congress Archive of Folk Song helped me go through manuscript materials related to field trips to southern prisons in the 1930s by John and Alan Lomax and Herbert Halpert. George Beto, director of the Texas Department of Corrections, gave me free run of the place, and instructed his wardens to help me in my inquiries. I’m grateful to him, and to wardens and assistant wardens Sidney Lanier and Scott Valentine (Ramsey), C.L. MacAdams and Doyle Walker (Ellis), H.E. Moore (The Walls), Z.E. Harrelson (Retrieve) and Howard Sublett (Wynne). Most, I thank the inmates for sharing so much with me.

The 1960s were a time when people of color were being turned away from ballot boxes. In the summer of 1964, three civil rights workers trying to help black people register to vote in Mississippi—Mickey Schwerner, James Chaney and Andrew Goodman—were murdered. They went missing June 21. I was then on the road to do the Texas recordings.

I left Texas July 12. As I drove through Louisiana, Mississippi, Alabama and Georgia, I listened to radio reports about the search for the three civil rights workers. Their bodies would not be found until August 4. All three had been beaten. The two white men–Schwerner and Goodman—had been shot in the heart; the one black man—Chaney—had been castrated, and shot three times. Their murders and the violence done to participants in the Selma to Montgomery March the following year were important factors in the passage of the 1965 Voting Rights Act.

When I made these recordings, Texas had 12,000 inmates in 12 prisons. It now (December 2018) has 142,000 prisoners in 107 prisons. In 2018, in Georgia, a candidate for governor blocked the voter registration of 52,000 citizens, two-thirds of them black. Later that year, , the U.S. Supreme Court upheld a North Dakota law denying voting rights to anyone lacking a postal address or proof of a residence. That disenfranchises most of the state’s Native Americans who live on reservations. I keep thinking of a verse in Bob Dylan’s “Stuck inside of Mobile with the Memphis Blues Again”:

The suffering and oppression continue. New York’s most celebrated experimental theater company, The Wooster Group, is currently touring a play based entirely on this recording ~ “The B-Side: A Record Album Interpretation.” The songs are performed in a venue neither I nor the convicts I knew more than a half-century ago could have imagined. Nor could we imagine that the brutal culture that provided the home for all that folklore would still be with us.

Notes to these songs

These are, with some exceptions, the notes that appeared in the 1965 Elektra release. I deleted a few absurdities and corrected some factual errors. The note for “Rattler,” for example, refers to “bloodhounds”; I later learned that the Texas prison dogs were Walker hounds. I didn’t attempt to change some anachronisms—for example, “Negro” and “Archive of Folk Song.” were essential to keep as they were, to help understand these dark times…